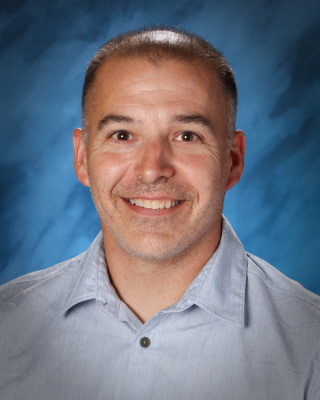 "It is not enough to have a good mind; the main thing is to use it well."

Mr. Thompson teaches Choir, Drama and 6th grade Music Appreciation at MMS. His journey to becoming a teacher began early in life. Growing up, he spent a great deal of time with his father, a Band teacher, at the school, football field, and in the Band room asking to help and to play the instruments. Over the years he learned many lessons from his dad about teaching, performing and collaborating with others.

Mr. Thompson was raised in Oregon and spent time in John Day, Portland and Eugene. In 1991, he began his education at Northwest Nazarene University and graduated in 1996 with a Bachelor of Arts degree in (K-12) Music Education. His career took a detour into the building industry for several years before he began substituting at Middleton Middle School. In 2002, Mr. Thompson was hired for his first full-time teaching job in Homedale. He began teaching Band, Choir, Jazz Band, Pep Band and Marching Band to 6th -12th grade students. In 2006, he moved his teaching talents to Middleton, teaching Choir and General Music at MMS. After the retirement of the long time Drama teacher, Mr. Thompson became certified in Theatrical Arts and took on a new role as the MMS Drama teacher. He looks forward to another fantastic year of performing opportunities for his students.

Mr. Thompson's hope is to demonstrate the love and enjoyment of music and drama. Music and emotions are a part of who we are whether we choose to pursue them as a career or enjoy our talents as a hobby or pastime. Teaching has pushed him to become more involved with the valley's Music organization, District 3 Music Educators. Mr. Thompson has served as a Choir Festival Manager, Middle School Chairperson and District 3 Website Manager for the last several years.

When he's not at school, he enjoys reading, woodworking, camping, fishing, and hiking. He loves spending time with his family. He considers himself the luckiest man alive because he has the opportunity to spend time every day on the commute from Nampa to Middleton with his wife, Sarah (former MMS 8th grade ELA teacher 1993 - 2017) who has become an Instructional Specialist for MSD. Mr. Thompson has a daughter and son. His daughter recently graduated from College of Idaho and is pursuing her Masters Degree in Education at NNU. His son is currently enrolled at the College of Idaho and is pursuing a degree in Accounting. Even though he didn't grow up in Idaho, Mr. Thompson considers Idaho his home state and counts his time teaching in Middleton as a true privilege!

I believe that participation in performing arts teaches students collaboration, discipline, and commitment. These principles help shape them into well rounded and productive members of the community.