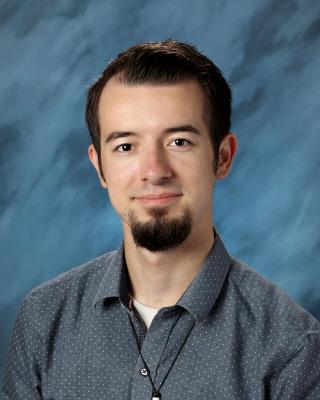 David Davis is the director of bands and instrumental music at Middleton high school. He heads the two concert ensembles, jazz, percussion, and athletic bands.

He started his career in music like most do, at the middle school level where he played the clarinet. Each year after that brought something new to try. Throughout the next seven years he would go on to learn piano, saxophone, and trombone in a variety of settings. Finally in college he picked up the tuba which he would go on to learn as a true secondary instrument.

David has been involved in many performing ensembles during his musical career. Late in high school he traveled with the Washington Ambassadors of Music across Europe performing in 7 different countries. Upon starting his music degree at the college level he played with the All-Campus Concert Band and Symphonic Winds on clarinet. It was during his time at Boise State that he discovered his passion for marching band and brass playing. He was a member of Blue Thunder’s sousaphone section for four years, two as section leader and finished his last year as a soloist during the exhibition at the DIII Mel Shelton competition. He also traveled and performed with the Seattle Cascades drum and bugle corps during their 2018 season as well as with Boise’s first independent WGI winds group, Armada Winds. After participating for 2 years as a performer in that group, he has since become the director of Armada Winds.

In his private studies, David has studied under Leslie Moreau for clarinet and both Adam Snider and Bill Waterman for tuba. He is currently a tubaist in the Treasure Valley Concert Band.

Being a band director makes for a pretty full plate but in his spare time he loves video games, DnD, attending concerts, taking care of his many fish, and try out different coffee blends.